The Royal Trees in The Meadows

In one corner of The Meadows, one of the large public parks in Edinburgh, stands a sundial pillar. Four metres tall and constructed from various blocks of sandstone, the pillar is inscribed on each side with 8 sayings relating to the passage of time, such as “Well-arranged time is the surest sign of a well-arranged mind”, and “Take heed of time before your time is taken”. Funnily enough the theme of time is relevant for this post!

Next to the pillar are two large Sycamore trees that most would regard as “the usual” park vegetation. But surprisingly, these trees actually have some history. To explain it requires some background of the origin of the sundial pillar. 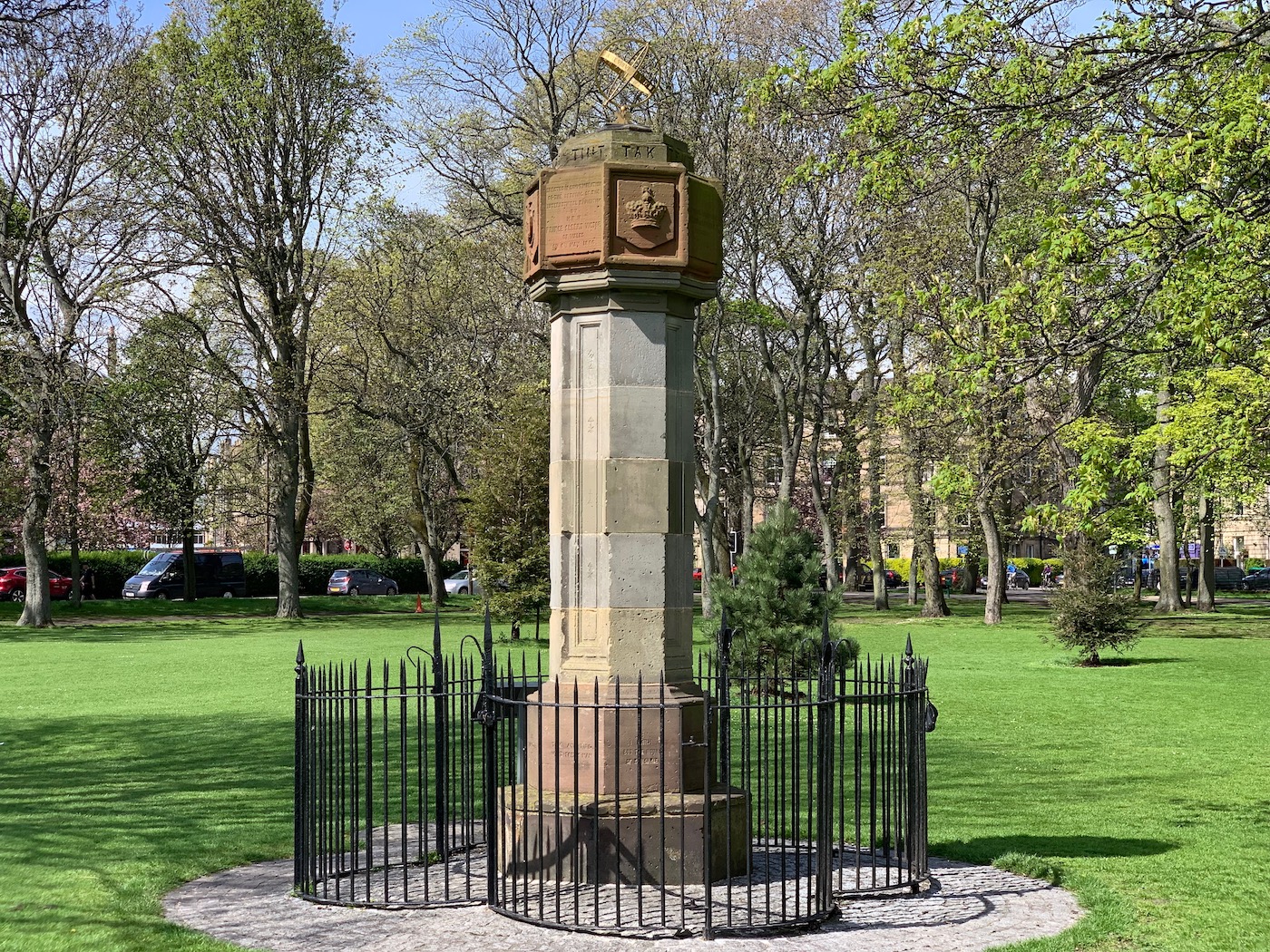 A rather helpful information board next to the pillar explains that the actual name of it is the Prince Albert Victor Sundial Pillar. The pillar was erected in May 1886, to mark the opening of the International Exhibition of Industry, Science and Art. The exhibition was quite a success and managed to attract a total of 2.7 million visitors when it closed 6 months later in October. The brief history of the International Exhibition is studied in more detail in a thesis by George Wilson Smith, and comprehensively documents the organisers, exhibitors, and visitors of the exhibition. 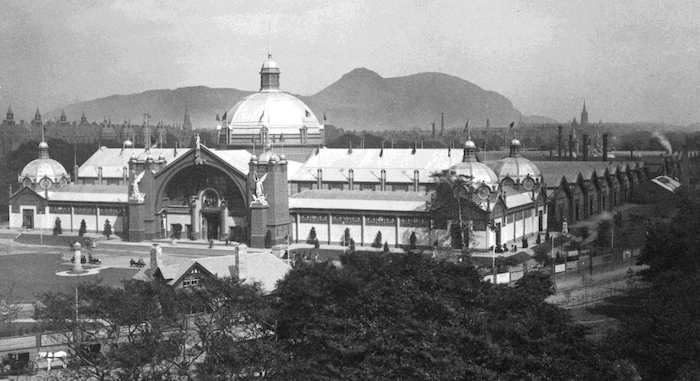 The International Exhibition in The Meadows, with the sundial pillar visible in the bottom left corner – Edinburgh Central Library yT570.1886: Cowan Scrapbook – Source

Because of Edinburgh Council rules, the exhibition building had to be removed from the park immediately after the event finished.

But the pillar was kept and still stands to this day, although it appears the four sundials, normally on the sides of it, have since been removed. Various other artefacts from the exhibition can still be found around Edinburgh, such as the Brassfounders Column and the Jawbone Arch (The arch is still under restoration since 2014).

The image is a bit difficult to read, so I digitized it below.

The first Elm tree was planted by Prince Albert Victor of Wales, on the opening day of the exhibit. Apparently none of the other royals wanted to officiate the opening. “Responsibility instead devolved to the gauche and inexperienced Prince, at twenty-two undertaking his first public duty in Scotland; he nevertheless performed the choreographed observances satisfactorily enough.” (Smith 2015, p. 234)

The second Elm tree was planted “in the name and presence” of Queen Victoria. According to one source, “The Marquis of Lothian stood in for Queen Victoria who was pretty tired after touring the exhibition”. But it may have also been the public mania that ensued when Queen Victoria visited the exhibit, making it very difficult to carefully control the venue surrounding the exhibit. (Smith 2015, p. 237)

So in the end, four trees were planted by royalty! One would therefore think the tree’s would have some kind of plaque or label indicating the mild historical significance, right?

So what do the trees look like in 2019? Here is a Panorama of the scene.

Click here to view the panaroma in full screen.

Tragically, it appears both of the elms have succumbed to the Dutch elm disease that has plagued Europe over the last half-century (I couldn’t verify whether or not it was the disease, so I’m just speculating because the disease is currently destroying 1000 trees in Edinburgh a year!)

The tree planted by Prince Albert Victor seems to have disappeared. I couldn’t find out when, but the tree is marked on several Ordnance Survey maps from 1895 to the 1950s and vanished from any records I could find after that point.

His tree appears to have been replaced with two Coast Redwood trees, the same species that are renowned for being the worlds tallest in California! They’re only a few metres high so far, but would be interesting to see how they turn out several years from now. They were both planted quite recently in 2013, and so far one of them has grown quite quickly to ~7 metres high!

The tree planted in name of Queen Victoria is quite a recent victim. According to Google Maps historical imagery, it appears the tree was cut in 2010, which is relatively recent. The only evidence of non-arial photography that I could find is this photo by Dianne King in 1999. 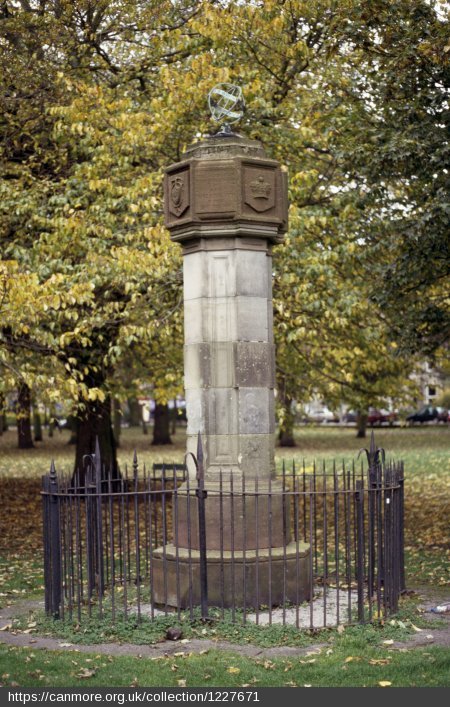 Queen Victoria's tree in October 1999, visible in the background behind the pillar – © Dianne King – Full version on Canmore.org.uk

Her tree was replaced sometime between 2013-2015 by an Australian pine tree. A curious choice, and it makes me wonder if the planters knew about the former significance of the Elm tree. I guess at least the Pine increases the bio-diversity of the park.

The sycamores, planted by the prince and princess of Wales, are still surviving. But none of the trees have any label or signpost to even indicate that any royals planted the trees. Perhaps it’s just to avoid vandalism as it is quite exposed in the park.

It only makes sense to recreate the map made in 1886. So here is a belated 2019 Edition of the map, with the added enhancements of satellite imagery and tree data.

The carvings inscribed on the sundial pillar about the passing of time are oddly appropriate. “Time and tide wait for no man”. I guess that applies even for trees. So let’s hope the sycamores will still be around for another hundred years.