The Union Canal is a canal in Scotland that goes from the Falkirk Wheel all the way to the centre of Edinburgh. The canal terminates at Edinburgh Quay, less than a kilometre away from Edinburgh Castle. These days the canal itself is only used for leisure activities such narrowboats, rowing, and canoes. But the canal also comes with other benefits, such as a towpath that has been converted to a cycle path, and a microcosm for plants and birds providing a much needed greenspace. 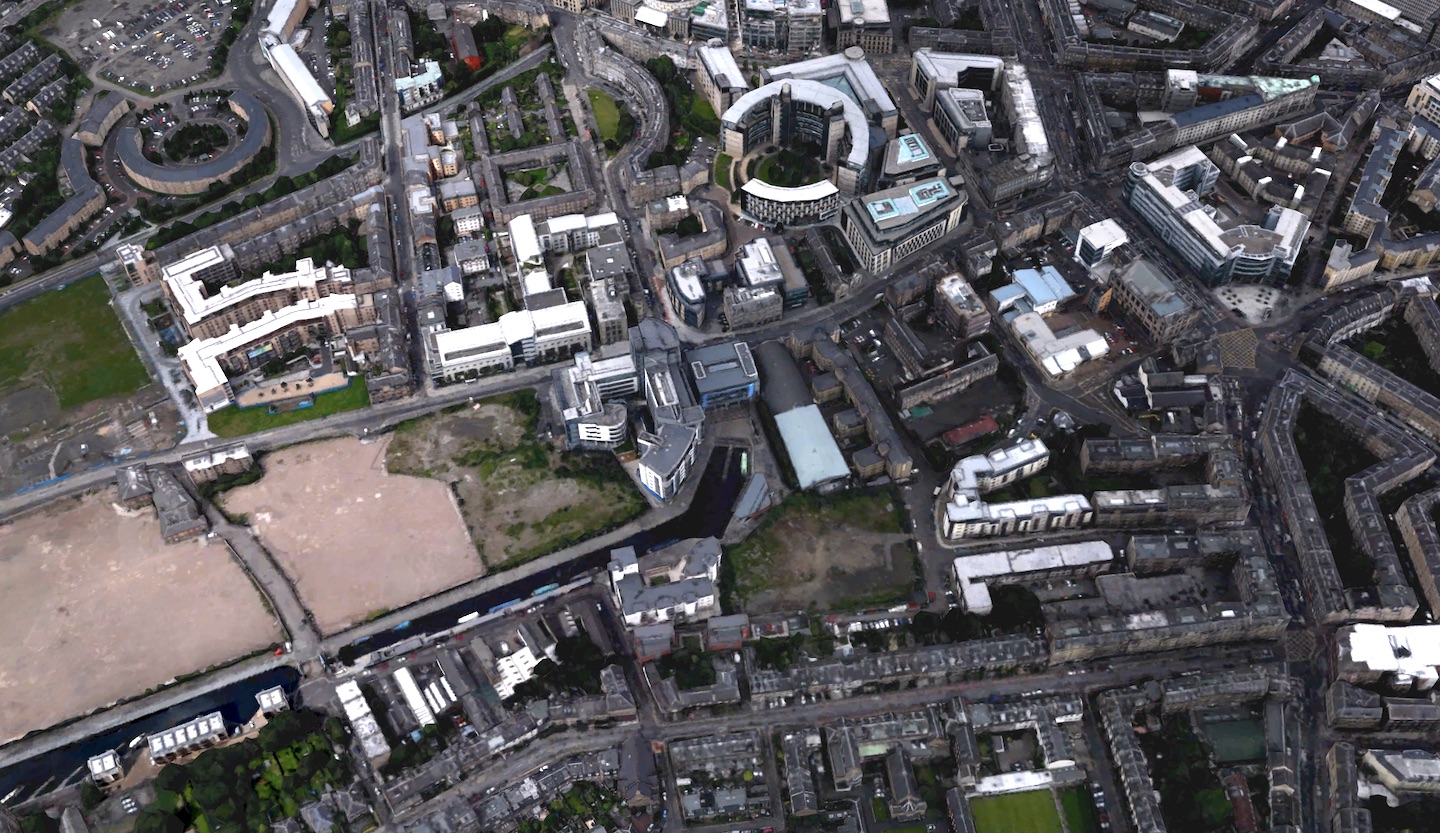 Historically the canal was once even closer to the city centre, terminating at the end of Lothian Road. But this was removed in the 1920s, after commercial use of the canal waned.

But what is not as well known are the plans for building canals through the city centre and down to the Leith Dockyards.

The canals to Leith

About 5 years ago I was in a small antique shop on the Royal Mile called Carson Clark Gallery. At the time I was interested in looking for a nice map of Edinburgh for an unrelated project. The owner was rather friendly!

While going through various maps of Edinburgh, he mentioned how the Union Canal was once going to descend with a series of locks down along Lothian road to the Princes Street Gardens. I was slightly skeptical at the time, because it sounds insane to have a canal cut through the centre of the city.

But I was wrong to doubt. Very recently, after browsing through the National Library of Scotland’s digital map gallery, I finally found a map with subtle evidence of these proposals. 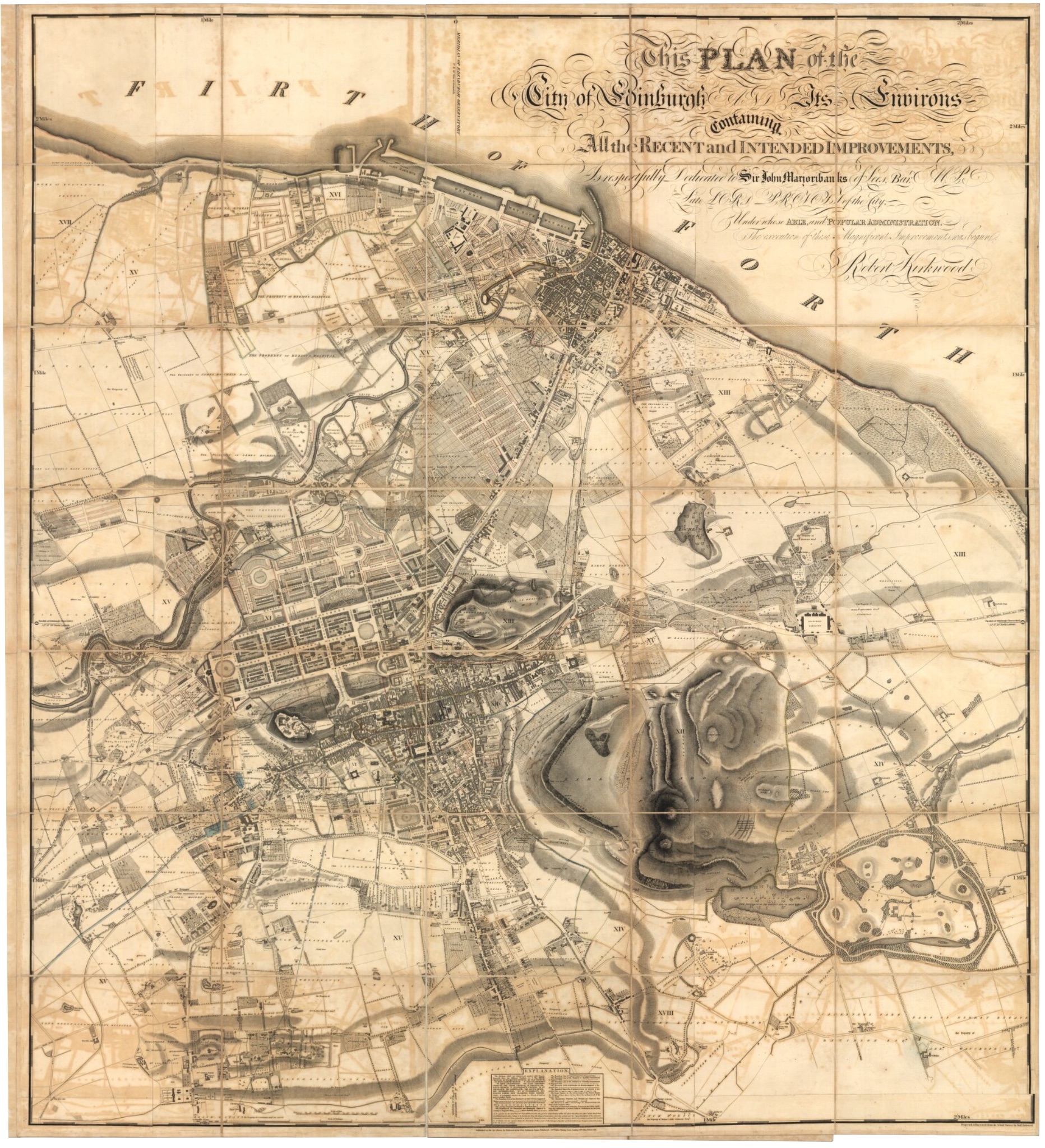 This plan of the City of Edinburgh and its environs. - Kirkwood, Robert, fl. 1806-1828 - National Library of Scotland

It was very easy to overlook the canals. The whole map focuses on a variety of proposals, from new streets to new housing developments in New Town. But worming around in the background are a series of lines that bulldoze through various buildings. Thankfully, in one corner, there are three helpful annotations stating what these lines are:

I’ve digitised the map of the canals below, which displays the 3 proposals, canal locks, and contours (every 10 metres). Click here to view the map in full screen.

Plans for the Union canal started in 1795 by John Rennie, five years after the Forth and Clyde Canal (Glasgow’s own canal system) had opened. The purpose of this new canal was to transfer passengers and also transport minerals such as coal to the city. Almost twenty years later, in 1813, Hugh Baird proposed his own canal to compete with John Rennie’s. Then one year later in 1814, Robert Stevenson also weighed in.

Each proposal took their own interesting route through Edinburgh, which would have dramatically changed the character of the city.

This proposal appears to have been planned with two routes. One that heads directly to Leith, the other running through the centre of Edinburgh. The canal would enter Edinburgh at an elevation of ~50 metres.

Shortly before arriving at Haymarket, the canal would turn North, eventually requiring a series of locks that run parallel with the ① Water of Leith passing what is now called Dean Gardens. The canal would take a straight forward path past Canonmills, Bonnington and ending up in Leith, connecting to one of the three dry docks.

The other route uses a 900 metre long tunnel to connect Haymarket with the Princes Street Gardens, exactly where the railway tunnel exists today. ② Cutting through the gardens it would then ascend to the east of Calton Hill (it’s not clear how, since the slope profile today is quite high!), descend down Easter Road, and ③ cross though Leith Links, and follow the coastline to Leith docks.

Rennie’s canal would enter Edinburgh at an elevation of ~85 metres. ① A basin in the middle of Bruntsfield Links provided a staging area for 3 locks to descend into The Meadows. The canal would follow the North Meadow Walk, which would have another basin at the very end. It would then cross Nicolson and St. Leornard’s Street, then ② descend past Holyrood Park using 10 locks (which would have been quite picturesque), ending up at the Royal mile again.

Baird’s canal starts at an elevation of 75 metres. Arriving at the ① south of Lothian Road, it would have a series of locks descending into the Princes Street Gardens. It then takes a very similar route to Stevenson’s canal for a bit, descending Easter Road. ② In the middle of Easter Road several basins would exist. The canal would then head west, crossing the Water of Leith, ③ ending up in the Leith dockyards. The map shows there were many options considered, although it appears the main preference was to take the longer route (Probably would’ve required less demolition!)

So what happened to the proposals?

In a retrospective written in 1825, John Stark states the following estimates for the various proposals.

Compared to the other proposals, Mr Baird’s was the cheapest. However, it was not the obvious winner, as the magistrates of Edinburgh were concerned it had “less general utility” and “the more extensive plan would have proved ultimately the most advantageous to the public” (John Stark, p. 66). His plan was debated for 4 years, until 1817, when Baird’s plan was reviewed a second time by Mr Thomas Telford and had his full support.

But where’s the canal going through Edinburgh?

One might suspect competition from the railways to be the reason why these plans never went ahead, but it wouldn’t be until the 1840s that the first real Railways in Scotland were built. More likely, the canal had already achieved its goal of reducing the price of coal by a third. It also managed to transport manure from the city out to the farms efficiently.

It would have been nice to see Hugh Baird’s proposal fully realised. Would Easter road have become a boulevard with a canal and road running parallel? Would the Princess Street Gardens have featured a canal, littered with narrowboats? It’s almost certain the canal would be replaced by the railway by 1846, simply because of how lucrative a railway connecting Waverley to Haymarket would be. But it’s an entertaining thought of what could’ve been.

As for myself, I’m thankful I now have proof of these proposals, and no longer feel like I’m spouting tall tales!