Airplane window seats are great! Not only are they more comfy and easier to take a nap in, but they also have the most quaint form of in-flight entertainment: The outside world!

But other than taking a few photos of holiday mementos and lens-flaring sunsets, what’s the point? Well, I’m here to prove that you can recycle your photos into something vaguely cool using photogrammetry.

For example, see this photo of Edinburgh I took in August 2015:

Using QGIS I can transform this photo onto a map using the ‘georeferencer’ tool. First I mapped several reference points on the photo with identifiable locations on a map of Edinburgh. Then I set the transformation function in the georeferencer settings to be ‘projective’.

After running the transformer, I ended up with a projected image that distorts the photo so that it can be displayed on a world map. You can see the final result by checking out the map below (fullscreen).

Hint: Pan around the map and zoom in to see the transformation up close. Toggle labels using ⓘ to help with identifying features. Toggle 'compare mode' using ◐ to compare the photo with commercial aerial imagery.

Using ‘compare mode’ in the map above you might notice the imagery is slightly warped in different parts of the map. For example, parts of Princes Street in the centre of Edinburgh are misaligned with the real map.

That’s the one downside of using simple projective transformation, which assumes the projected surface is always flat. As the illustration below demonstrates, by using a transformation that assumes a flat surface, the ground surface that is in higher elevation to the projected surface will appear to shift away from the camera and conversely points in lower-elevation will shift towards the camera.

This error becomes more pronounced the closer to the ground the photo is taken. In the example below (fullscreen), notice how the ‘Greendykes Bing’ stretches (see top-right of the photo). The effect is also noticeable with the farmland shifting around to the left of the ‘bing’ where the land dips into a creek.

So what are some applications of having this data? I’ve come up with three:

One benefit to creating my own imagery data is the freedom of ownership. I, as the individual who took the photo, have the right to apply any copyright license I please. So theoretically I can publish this work into the public domain.

There are only two other ways I know of to get imagery right now that are available to be used publicly, both of which have their own problems.

Satellite imagery in the public domain does exist, such as Landsat 8 and Sentinel-2. But from what I can see, these images have a resolution of ~30 meters. In the photo I took, the midsection of the photo (The centre of the city) has a resolution of ~15 meters. With a better camera setup I could probably get much better results than the casual photo I took. 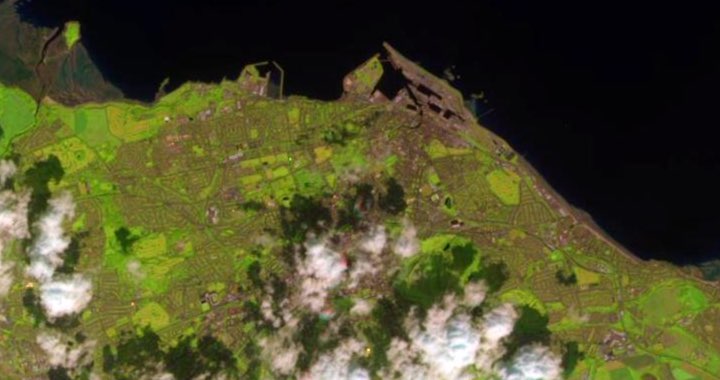 Drone imagery is also an option. These images are usually taken by consumer drones, and are pretty effective at capturing hyper-local aerial data. Much better quality than what I can achieve through an airplane window!

However the issue with flying drones for collecting imagery is often the legal restrictions. For example in the United Kingdom, the Civil Aviation Authority restricts drones from flying anywhere above people, including in buildings or vehicles, with a no-fly-zone extending all the way to the legal height limit. So while drone imagery is easy to get for rural areas, it’s not so useful for cities. In contrast, commercial flights have no problem flying over cities, so it’s possible to capture imagery of urban environments.

So between satellite imagery and hyper-local drone imagery, capturing aerial data from a commercial aircraft is a neat middle ground. 😁

It’s also possible to use the aerial imagery for getting very up-to-date information that can be used for mapping purposes, such as contributing data to OpenStreetMap.org. Depending on the quality of the photo, it might be possible to detect newly built infrastructure like roads and buildings.

For example, I took the photo above (fullscreen) in March 2017. Some of the wind turbines visible in this photo were literally in the process of being constructed when I took the photo. Since it was March, that would have been several months before the yearly aerial imagery for 2017 was collected, which usually is in the late-spring and summer months.

The gradual construction of a wind turbine from start to finish. My photo reveals the turbine being constructed, but the construction equipment is still visible.
(© PDOK Luchtfoto Beeldmateriaal 25cm, 2016 & 2017)

In a lot of countries yearly aerial imagery is very rare. So while my example above is a bit contrived since the Netherlands captures data annually, it could still be useful in other countries.

So aerial data captured on commercial flights has a slight edge to professional aerial data, which is great for amateur mappers who want to get the scoop before the professional surveyors. Of course, you can’t really control what photos you’ll be able to capture because of flight paths and cloud conditions, but it’s still an edge. 😛

Time-lapsing pictures captured from the sky can be difficult, but by transforming it to fit on a map, it’s much easier to identify gradual changes to a landscape or city.

For the example below (fullscreen), you can see what Marker Wadden looked like in March, 2017.

For context, below are a sequence of photos that show what Marker Wadden looked like between 2016 and 2017:

Hopefully I’ve convinced you that re-projecting your holiday photos is a neat idea with some cool applications! Or at the very least thought it was mildly interesting.

Of course there are several limitations with taking photos from a plane.

…but that doesn’t stop us from trying, right? 😄 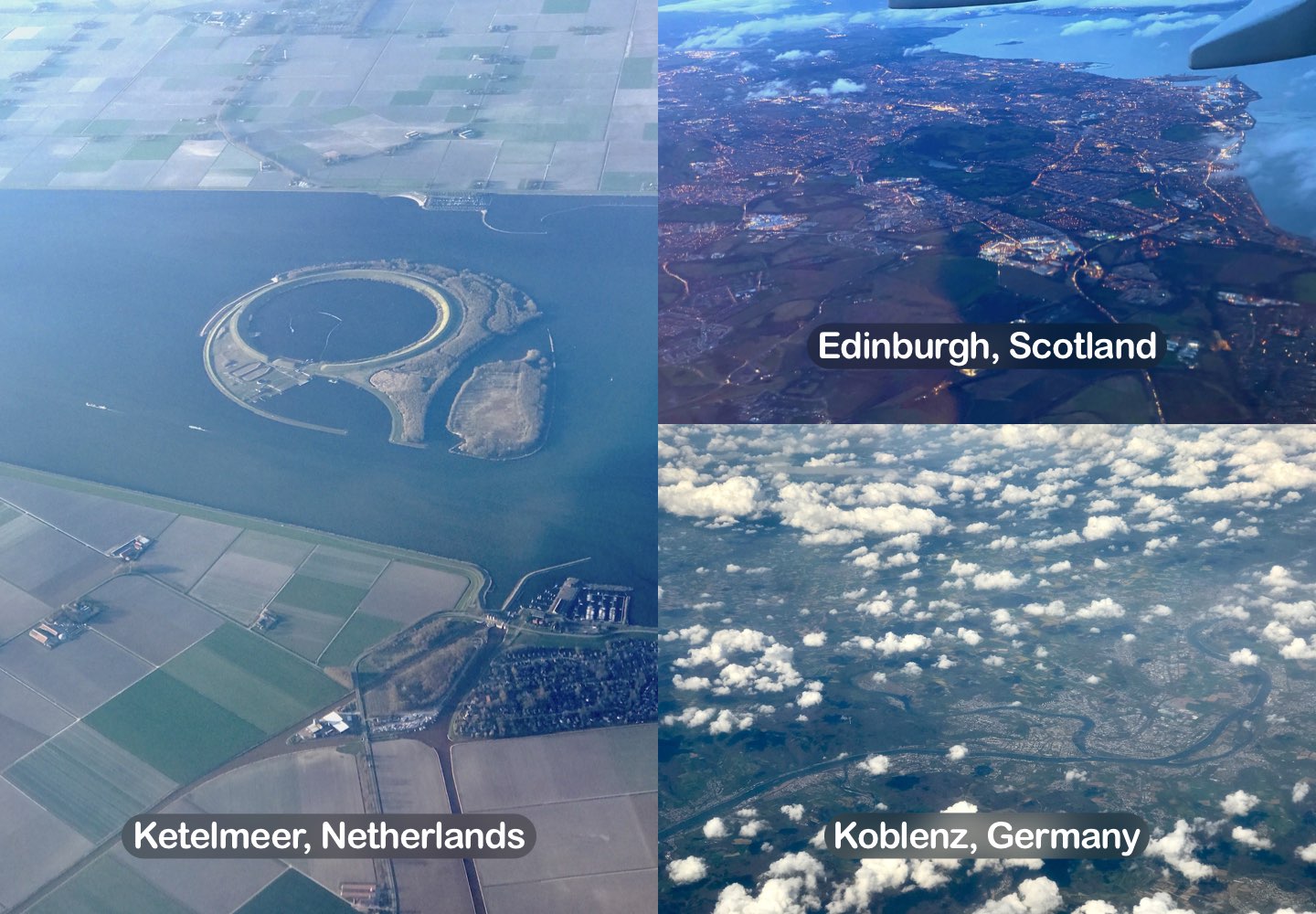 I had a bit of fun doing these transformations, so I dug through my photo library for more photos I could georeference. So here are a few more that I thought looked interesting: